Playing Dota Underlords alone is fun, but with a friend, it’s even better!

In this article, we’ll discuss how the strategy in Duos is different than the strategy when playing alone (in standard mode). Of course, it’s the same game, but there are a couple of key differences you need to understand (together with your partner) in order to have consistently good results! 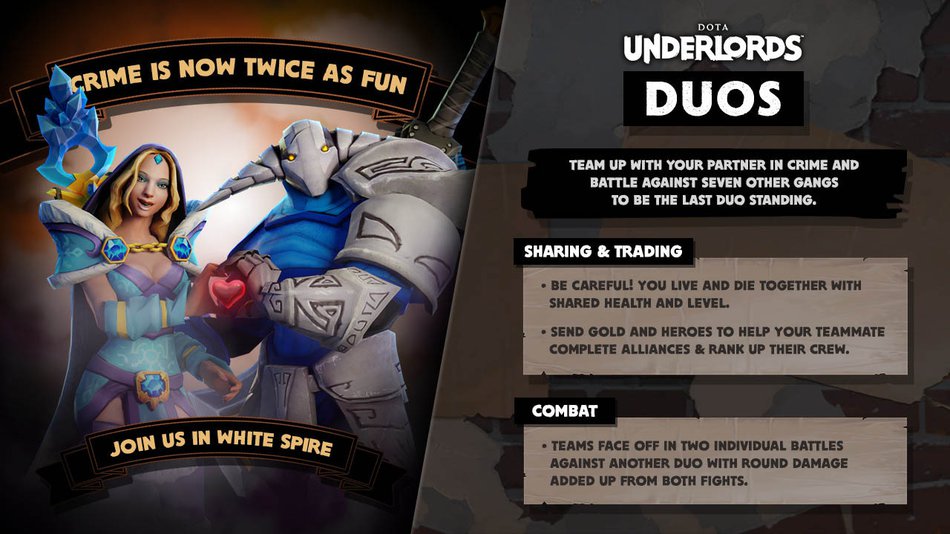 The biggest difference in Duos is how you approach your long term strategy in the game. There are a few extremely important differences from standard which change the dynamics of the game:

you have a shared HP pool with your partner, but you fight separately in rounds. This means that if one of you loses but the other wins, the HP impact of the round would be low. If both of you lose, however, you can lose HUGE chunks of your HP. In Standard, it’s not possible to get beaten out of the lobby in the early game. In Duos, it’s absolutely possible if both of you have a terrible strategy/luck. This means that staying competitive with most of the lobby in all stages of the game is very important and both of you going on a losing streak is a terrible, terrible idea. If one of you is strong enough, however, the other one can play more greedily.

you are twice more likely to find upgrades. You can share heroes, which means each one of you is essentially searching for the upgrades of two boards at the same time). This has two major implications: First, buying all relevant upgrades you find is a lot more gold intensive, which means it’s hard to go to 50 gold and a high lvl as fast as in solo. Second, most opponents will be quite a lot stronger compared to solo because of the more frequent upgrades.

you share the same level as your partner. This brings an interesting dynamic to the team – you want to run different builds for the sake of upgrades, but at the same time, you want your builds to work optimally at the same level (more on that below).

The overall game plan is the same as in solo/standard – you want a good economy for the late game.

The reality of finding upgrades for two boards, however, means that it’s much harder to save gold. This doesn’t mean you should go to an extreme – rolling early is as much of a mistake as before, because you still want to save as much gold as possible. At the same time, not buying upgrades in order to save more gold is just as much of a mistake - falling behind in upgrades as a team means you’ll lose your HP too fast to even reach the late game.

The rules of thumb re simple:

You obviously want to run totally different strategies so that you are looking for entirely different heroes in the shop (not doing this will reduce your chances for upgrades a great deal and will lose you the game).

At the same time, you don’t want to run one upgrade-value and one lvl-value strategy, because you and your partner have a shared level. For example, a good-stuff Warlocks Warriors build wants to push for lvl10 ASAP, while the usual Assassins builds doesn’t care about lvl10 as much as it cares about upgrades.

This means that if you are running Warrior/Warlock and your partner Assassins, you’ll have different priorities in the mid/late game (once you reach 50g and lvl7/8). The Assassins build will want to stay on lvl8/9 and roll for the maximum amount of three-star upgrades, while the Warriors build would like to invest in levels to reach lvl10 and the higher tier heroes. This dissonance is dangerous because you’ll neither optimize your upgrades nor your levels – the Warriors player will be hard-pressed to lvl up to 10 on his own fast enough (it takes twice the XP it does in solo), while the Assassins player will be searching for upgrades on his own, while opponent players would be rolling together and finding upgrades almost twice as fast.

The right move in this situation would be for the Warriors player to adjust his build into something that works well-enough with upgrades so that the Duo can stay on lvl8/9 for longer and roll. That would be Warriors/Hunters or if you insist on Warriors/Warlocks – some kind of (3) Warriors (4) Warlocks iteration with a damage-dealer like Arc Warden.

In solo standard mode, level value builds are generally a bit better and have been dominating the meta in the last month(s). Here, however, things are different simply because you can find your upgrades twice as reliably and frequently.

The scales tip in favor of upgrade value builds or in other words: the best Dota Underlords Duos builds are the builds that love searching for upgrades more than they do levels and high-tier units.

Those would be most of the lvl9 builds in our Dota Underlords Builds Tier List (Assassins, Knights, Hunters, Scrappy, Brute, Elusive), and none of the lvl10 builds.

That said, it’s definitely possible to play lvl value builds as well (Warriors, Mages, etc.). After all, they don’t mind updates as well, but when you do so make sure that both of you are playing such builds so that both of you can push for higher levels faster.

I hope you enjoyed this Dota Underlords Guide. If you did, make sure to check out the rest of our Underlords content library!

A list of the very best fantasy video games (classic and modern) taking place in the most immersive fantasy worlds. Escapism at its finest. The list is loosely ordered by genre.

View
Login to Add to Collection
Success!
The Best Fantasy Video Games by Genre has been added to your cart!
View
Go to collection
The Undisputed Dota 2 Tier List
dotahaven
text
Drafting
Funny

This Dota 2 heroes tier list is my totally objective, fully unbiased, and extremely fact-based opinion on how absolutely brilliant or utterly terrible each Dota hero is.

We tested 60+ builds to find the best ones in the current Dota Underlords meta.

An extensive guide about the basics of Dota Underlrods created for new players:

A tier list ranking all Dota Underlords items. More importantly, information and tips about each individual item - what it does, why it's good, and when it's useful.

A tier list ranking all Underlords heroes in the current meta. More importantly, information and tips about each individual hero.

View
Login to Add to Collection
Success!
Dota Underlords Tier List: Hero Tips and Tiers has been added to your cart!
View
Go to collection