Why did Dota Underlords die? 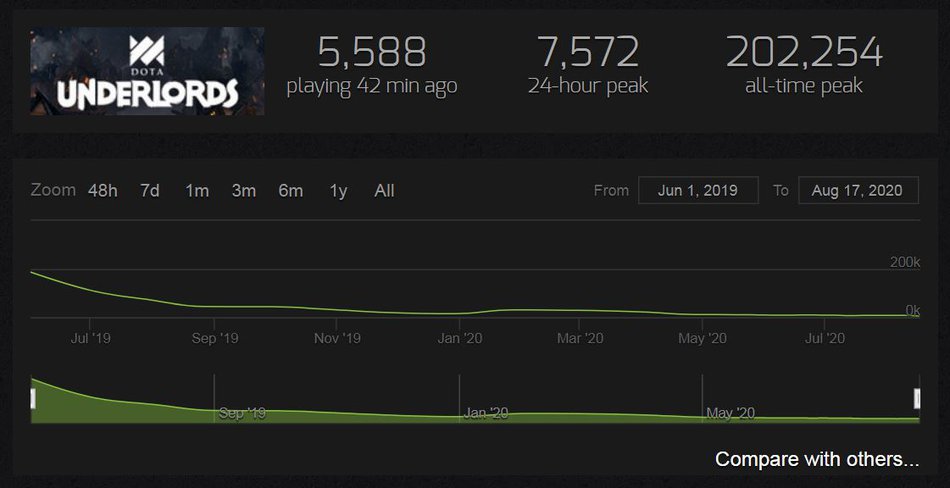 I won’t claim to be objective: it’s no secret this website has been focusing mostly on high-quality Underlords content in the hopes that we’ll grow with the game. It would be the understatement of the year to say the fate of Valve’s Auto Chess has been frustrating to us. That said, I believe that being heavily involved in Underlords as a content creator and as a player (I reached the rank of Lord of White Spire at a point) means that I’ve been spending a lot of time thinking on this topic. Hopefully, my thoughts would be interesting to other people that were involved with the game in some manner.

The most common opinion I hear on the question of why Dota Underlords declined so massively is that the whole Auto Battlers (Auto Chess) genre was just a short-lived fad and Underlords simply died with it. While there is certainly a grain of truth in that, I have a hard time believing this is the main reason when Teamfight Tactics (Riot’s Auto Battler) is still maintaining above 10k concurrent viewers on Twitch, while Underlords is struggling to maintain 100 viewers. (It’s worth mentioning that Hearthstone Battlegrounds is also much healthier.)

This kind of reasoning isn’t uncommon, and not only for games. For example, the micro-video social network Vine was massively popular for a while (200 million users at its peak), yet it also died supposedly because it was just a fad. Yet, TikTok, which is obviously extremely similar, is currently the hottest mobile app in the world (Vine vs TikTok). It turns out that Vine (with parent company Twitter) just didn’t understand their market well enough and missed their chance.

From the very start, Valve set out to improve an already existing game – the Auto Chess mode in Dota 2. The easiest way to seemingly make something better is to make it shinier and to add more features (i.e. to make it more complicated). Yet, I’d argue that this is exactly the wrong direction when you’re developing a game that’s chill and casual. Casual games need to be accessible to remain popular and attract new players. Increasing their complexity might make them more enjoyable to their most hardcore players, but it can just as easily make everyone else disinterested because it defeats the purpose of the game.

Saying to the sub “we’re going to simplify the game to make it more casual, remove some player agency if necessary and increase randomness in favor of shorter match duration” is sure to be met with outrage. After all, the people who can be found in the subreddit are exactly the most dedicated players that want the game to be more skill-based and competitive. Yet, the silent majority doesn’t play the game that way – they play a match on their phone before going to sleep or while waiting for their friends to gather for DOTA. They want the game to be fast and fun, not deep and competitive.

To speak in examples, the update that introduced the actual Underlords with their RPG choices while slowing down the matches was a huge hit to the game. I’d speculate that if this first significant big update moved the game in the opposite direction, there might have been an outcry amongst the hardcore players, but the number of casual players who play a match or two on their phone could have grown in the long run.

While I think the above arguments are true, they were the less important half. After all, Valve did develop Knockout (although IMO way too late and with too little emphasis on it) and it didn’t save the game. The big problem wasn’t so much the development direction, but rather how they marketed the game.

First, the game is called Dota Underlords. To any person that doesn’t play Dota, the message is “this is a new game by Valve that’s not for me because I don’t play Dota”. This negative first impression is amplified by the fact that Dota is notorious for being the most inaccessible computer game in existence, which damages Underlords by association a great deal, especially when it is much more chill and casual than Dota in nature.

I have no idea why Valve though it’s necessary to broadcast that their new mobile game has a very strong connection to Dota when in reality it has very little in common with their MOBA gameplay-wise. The Dota players would have found out about it anyway. Surely LoL players are well aware TFT exists and uses LoL heroes despite it not being called LoL Tactics.

Second, I feel that Valve seriously misunderstands how casual mobile games are marketed. People are not passionate enough about the games they play while pooping to try to recruit their friends, especially when we’re talking about games that aren’t built to be played in a team. Niche casual mobile games (with a few exceptions) don’t spread as efficiently by word of mouth as super competitive team-based computer games.

That’s why the mobile game industry promotional standard is super aggressive ads to keep the playerbase healthy, and that’s why monetization in these games is quite predatory – the customer lifetime value needs to be high enough to justify the high player acquisition costs.

A non-aggressive monetization approach (like what we have in more competitive computer games and as a result - Underlords) means ads don’t make financial sense, and once they don’t – the game can’t grow its player base because organic growth is much, much harder.

Third, even if they didn’t want to go the route of bad monetization practices and annoying ads (which is admirable, albeit risky), they could have used another way games spread nowadays: influencers. Valve organized a one-day-long launch event with Dota personalities, which once again totally misses the point of who their marketing efforts need to reach. If they paid a few Hearthstone, Magic, TFT, and variety streamers to play the game on and off for a month (on their own channels!) to keep Underlords on one of the first few spots in Twitch’s Browse tab, they could have reached a lot of non-Dota players and hopefully – grown the game that way by exposing its merits to a larger, non-native, more casual audience.

So, through misunderstanding why Auto Chess was popular and what industry they are competing in (mobile casual strategy games rather than hardcore competitive strategy games), Valve might have unintentionally extinguished the potential that Dota Underlords had.

Of course, the disclaimer here is that this is only my personal opinion and that I’m not basing it on any empirical evidence. I’m basing this opinion on my intuition, which means I might be wrong. That said, I believe it’s more likely that I’m partially right. While I might be missing some important elements, I don’t think the recent history of Artifact and Underlords should give people a lot of hope in Valve’s ability to market a video game in 2020.