Welcome to part 3 of our TI9 Meta Recap analytical series where we’ll finish our analysis of the group stage and hopefully get a better idea of where the metagame storyline of this tournament is going for the main stage. (If you missed out part 1 & 2, you can check them out here: TI9 Meta Day 1, TI9 Meta Day 2)

To sum-up, day three and four were the days of the space-creating, ganking pos. 2 heroes that scale well with farm. Tiny on day 3 and Storm on day 4 unexpectedly surged in popularity and with great success – they won more than 70% of the games they were picked in. Moreover, the overall most consistent mid hero of the TI9 group stage is Kunkka – another active pos. 2 hero.

Heroes of the Day: 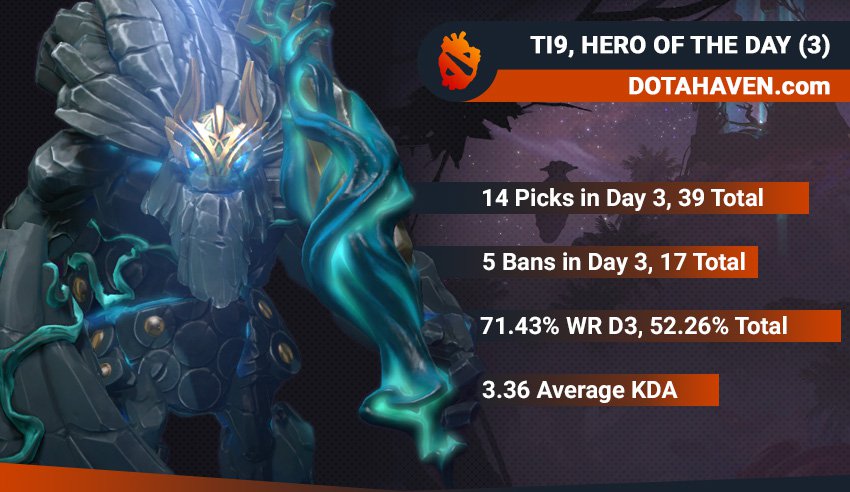 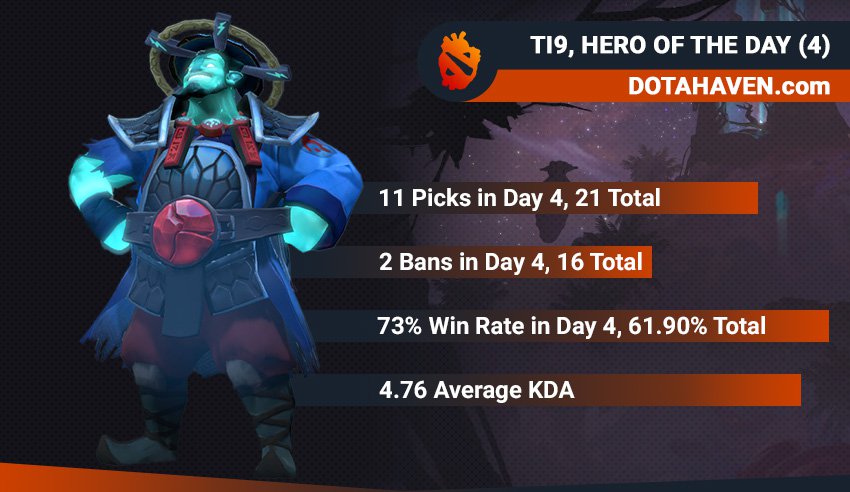 Pos. 1: Gyrocopter is a classic at TI – a stable carry that is strong in the lane (kill potential), strong in the mid-game (AoE damage from his spells), and strong in the late game (scalable AoE damage from Flak Cannon). He finishes the group stage as the most popular pos. 1 hero and one of the most successful, with a win rate of 62.50%. The interesting development around Gyro in this TI is that he is finding success without his traditional partner – Io. The other popular pos. 1 heroes are tanky, hard to kill frontliners like Lifestealer, Alchemist, Wraith King, Sven.

Pos. 2: Tiny had an abysmal win rate (25%) on day one. He improved on day two and reached 49%, although he fell a bit in popularity. On day 3, all of a sudden he became the most picked hero with the impressive 14 games and 71.43% win rate. Another similar story was Storm on day 4: he was played a total of 10 times in the first three days with 44.44% win rate. On day 4, however, he was picked 11 times and reached 73% win rate. A big contrast with these heroes is Leshrac, who is also one of the popular midlaners, but on day 3 he had the pretty bad 30% win rate (50% on day 4, but with fewer games). Lesh is also an active mid-laner, but he is not a ganker – he prefers 5-man pushing with his team. This leads us to believe that this TI is currently in a ganking-centered meta (the over-leveled pos. 2 hero ganks with the help of his supports and pos. 3 to create space, while the pos. 1 hero free-farms). This also makes hard-to-gank pos. 1 heroes the best choice right now: tanky frontline carries like Lifestealer, Wrath King, Sven, or to a degree Alch. Relatively greedy builds (Midas, Radiance, etc.) are standard on these heroes so that they can use the free space they have efficiently.

Pos. 3: The ganking meta, IMO, to a degree also shapes the offlane meta. As a pos. 3 you need a hero who can participate in the early-mid game ganks but also who can have an impact in the late game team fights. Ogre Magi continues to be the most popular offlaner (together with Ench, but she is banned more often than not), but his win rate steadily falls and on day four it was 25%. The best offlaners seem to be initiators/counter-initiators with stuns: Tidehunter, Sand King, Beastmaster, Centaur.

Pos. 4: Invoker is the most interesting pos. 4 hero on this TI by far, and even though on day 1-3 he performed well, on day 4 he had a relatively bad win rate. This happened (arguably) because an under-leveled and under-farmed support Invoker is a great target for ganks for an over-leveled and over-farmed ganking midlaner like Tiny or Storm. Unlike other non-greedy pos. 4 heroes, Invoker with no resources has a hard time to have a big impact – he needs a relatively good game. In fact, the best pos. 4 heroes seem to be heroes who can comfortably switch between the 4th and 5th position like Elder Titan, Mirana, Crystal Maiden. They scale well with resources, but they can be useful in a bad game as well.

Pos. 5: Elder Titan seems to be the most impactful support hero (57% overall win rate, 83% on day 3), and he is often switched between the 5th and 4th position mostly depending on the players and the other support hero. Besides Elder, there are plenty of other high-impact pos. 5 heroes like Shadow Demon, Ancient Apparition, Chen, etc. Grimstroke definitely also deserves a mention – he has the worst win rate out of all heroes with more than 15 games.

Wild meta prediction: It’s worth mentioning that a ganking meta is usually countered by a 5-man meta: i.e. teams that can start playing together from very early on and taking objectives. The reason is that 5-man teams are simply not vulnerable to ganks – there are no out-of-position heroes to pick-off, and in general the best gankers in Dota are not the best heroes at defending objectives or early-mid game team-fighting. This means that it is possible that during the main event some teams would try to counter the dominance of active mid-lane gankers by drafting 5-man push strategies (think Brewmaster, Undying, Dragon Knight, Terrorblade, Leshrac, Jakiro, Dazzle, etc.). That said, it’s also quite possible that the 5-man push heroes aren’t good enough right now for various reasons (e.g. weak in the lanes, etc.). Consequently, this plan needs to be tested out in scrims before it’s implemented in high-stake games.

One of the only teams that utilize Void the most (5 picks, 80% WR). Since Void is off-meta and they are having success with it, it might be worth for their opponents to ban it since it will be pretty hard to find training partners who can replicate LGD’s playstyle with the hero successfully. Ogre and ET are their other most-picked heroes with 66.6% and 83.3% WR out of 5 games each, while Shadow Demon is one of their most successful with 4 wins out of 4 Games, but these picks are very popular among most teams.

They pick Jakiro much more than other teams (6 games), but they have a mediocre 50% win rate which is low for a team with 5 total lost games. Another not-too-successful hero of theirs is Invoker with 5 games and only 40% win rate. Their most picked and most successful heroes are Alch and Centaur with 4 wins out of 5 games each. Kunkka, CM, and Tiny also deserve a mention at 3 wins out of 4 games.

They play a lot of Gyro and Sven with good results (83% WR, 60% WR). MSS also has a scary Mirana, but she is more often than not banned. Worth mentioning is that they have 4 games on Axe and 100% win rate on the unconventional offlaner, which is something to keep an eye on.

They play a lot of Crystal Maiden very successfully (7 games, 71.43% win rate), as well as a lot of Dark Willow, but with the more mediocre 57.14% WR. They are also one of the teams that value Morphling the highest – Micke played him in 5 games with the decent 60% win rate.

Nikobaby has one of the most successful Wraith Kings in the tournament (5 games, 80% win rate), while Moon has a great Tiny (5 games, 60% win rate). The team also values Ogre and Death Prophet highly, but with the more mediocre 50% and 40% WR.

Elder Titan (6 games, 66.67% WR) and more interestingly Templar Assassin (4 games, 75% WR) are their most successful heroes. They’ve also used Storm four times, but quite unsuccessfully with only 1 win with the hero.

They play a lot of Phantom Assassin compared to other teams but have only 50% win rate on her. Their most successful hero is Kunkka with 2 wins out of 3 games.

They have the most games on Ogre than any team (8, 62.50% WR). Their most successful hero is Gyro with 4 wins and 0 losses. They also play Shadow Shaman more than other teams with 4 games and 3 wins.

Infamous play a lot of Tiny (7 games), but with the mediocre 42.86% win rate. Their most successful hero is Life Stealer with 3 wins out of 4 games.

Fnatic plays a lot of Leshrac (5 games) and they do it a bit more successfully than other teams (60% WR). They also value Shadow Shaman a lot, similarly to VG – 5 games, 60% win rate. Their Ogre is 2 wins out of 5 games, and their Ember – 1 win out of 4 games, which means they might stay away from them at least for the Bo1. Overall, they seem to have a higher success with push strats.

Their most successful hero is Elder Titan with 4 wins out of 6 games. They also value highly Ogre, Ember, Mirana, and SD, (like most teams in the tournament), but they don’t have an amazing win rate with them. Their highest WR hero is Gyro with 3 wins out of 3 games.

Here are two games of "weaker teams" beating a stronger competitor that demonstrate well the hero interactions we discussed above:

This game was the 2nd loss of Secret in the group stage and a big upset considering the opponent. The game illustrates a point shown in the statistics above pretty well:

Tiny had an enormous impact on this game, constantly pressuring and ganking Secret, taking away map control from them and constricting the farming space of Alchemist. In this game having the follow-up of AA’s Ice Blast was extremely valuable because it meant that both the Alch and Lesh are killable with one combo. The impact of Moon compared to MidOne made it pretty clear why Tiny is doing great on day 3, while Lesh is struggling despite the fact both heroes are popular:

Secret’s lineup is built to create space for Alch by pushing (Lesh, Jakiro, Beast). They don’t have amazing gankers, which resulted in Wraith King farming uncontested most of the game, while Lesh and Alch were almost constantly afraid of dying. The lack of ganking potential (and mobility) on Secret meant that they have trouble reaching the enemy backlines and gave Raging Potato’s pos. 4 Invoker an easier-than-usual game (he participated in 22 out of 29 kills, Tiny in 24).

Not being able to reach the backlines is an even bigger problem when the enemy is running Wraith King, because he is an extremely unfavorable target to initiate on (because of Reincarnation).

This game is was the absolute opposite for the pos. 4 Invoker and demonstrates why he didn’t have amazing results by the end of the group stage. Unlike Secret in the game above, Alliance has plenty of tools to deal with him – an under-farmed and under-leveled support Invoker is food for a mid Storm Spirit, and even if Storm isn’t in the vicinity they have Ember who can catch him.

In this particular game, Storm was also a great pick versus the cores of LGD – with the help of his team he can pressure Slark and restrict his farming space, and if needed in fights he can get on top of OD.

The unusual thing Alliance did this game is to run a pos. 3 Bristle – most teams try to run a hero with control in the offlane to help out with fight initiation. To compensate for this, Alliance also drafted Enigma. Having a greedy pos. 4 like that makes the lanes a bit weaker, but Alliance compensated by having a pos. 1 Ember – an active and strong core in the early-mid game that doesn’t require a lot of babysitting.

The plan worked out great and gave them an upset win over LGD.

Thanks for reading! If you are enjoying our TI9 coverage, make sure to follow us on Facebook and Twitter (below) in order to get notified when we publish new articles. Also, the likes/shares really help to spread the word!

Also, make sure to check the website every once in a while! We will try to publish new articles every day after the games finish.