Since the original Dota Auto Chess was created, we’ve been creating A LOT of auto battler content here at Dota Haven. With Hearthstone joining the auto battler party, we couldn’t miss on the opportunity to check out the Battlegrounds game mode and give our thoughts of how it compares to the other popular games in this new genre – Dota Underlords, Teamfight Tactics, Auto Chess, and Chess Rush.

Since Hearthstone Battlegrounds is built on the basis of a card game rather than a MOBA, there are some key differences right from the start.

There is the same recruit (shop) and automatic combat phase as in other auto battlers, but the other fundamentals in the game are quite a lot different:

The basics of the shop are pretty much the same as in the other games in the genre. You get a few units randomly (from a shared pool) that you can purchase and use in your army. You can refresh the shop for a price, and you can level-up in order to get a chance to find higher-tier minions. 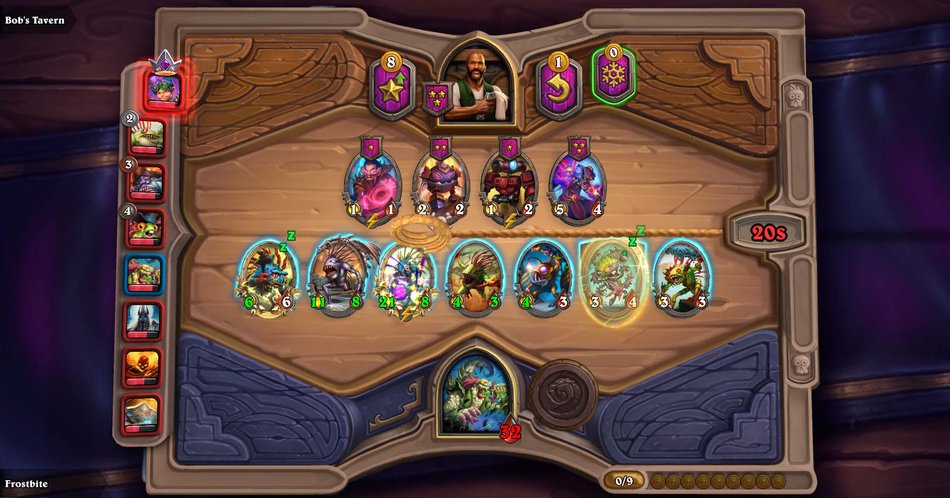 A relatively big difference in Battlegrounds is that the level of the shop not only determines the chance to get stronger minions, but also the number of available units in each roll.

E.g. in the screenshot above, the shop is on lvl3 (the three stars on the left of the tavern keeper), which means it has a total of 4 units for each roll. This gives an additional incentive to upgrade whenever possible, which is needed because low-tier minions can scale better in Battlegrounds compared to the other games in the genre (more on that below).

At the same time, leveling-up doesn’t increase your own board size (you can have 7 minions from the start of the game).

The economy of the game, however, is vastly different.

There is a gold cap: you get up to 10 gold each turn and can’t save any of it for the next turn. This means you want to spend all of it.

The gold cap (and the lack of interest) means that playing a slow economy-focused game in Battlegrounds isn’t really possible and you roll searching for upgrades and useful minions much more often than in the other auto battlers. That said, you still need to make a decision whether to invest in levels or to spend your gold on rolls in order to make your board stronger ASAP.

Because of the gold cap, everything in the game has a fixed price. Buying minions always costs 3 gold regardless of their tier (another incentive to upgrade) and minions always sell for 1 gold.

Tip: Minions with summons (tokens) are a great way to “transfer” some of your gold into the next rounds in the early game. You can sell the original minion + the token for a total of 2 gold (twice more than any other unit). E.g. it’s common practice to sell an initial token to gain one more gold and e.g. buy two minions instead of one on turn three when you’d have 5 gold (each minion costs 3g).

Since Hearthstone is a card game, the combat phase in Battlegrounds isn’t real-time but rather turn-based. The minions take turns attacking from left to right, and their attack target is totally random (they still attack minions with Taunts first). The player with more minion attacks first. 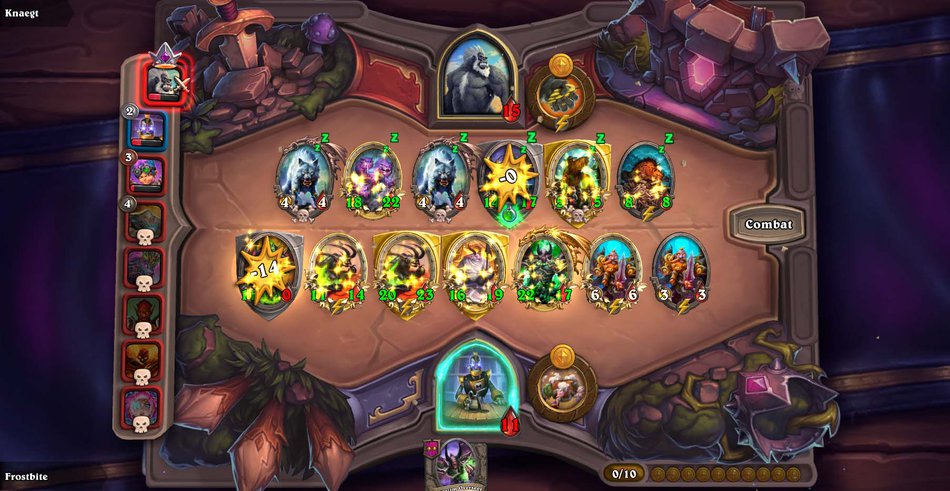 Example: my left-most minion attacks first. In this example, it attacks one of the two Taunt minions (chosen at random) on the enemy board (and dies without achieving too much).

Scouting opponents is not possible: you cannot scout opponents to see their lineup and positioning, which means that you aren’t really able to adjust based on your opponents. Consequently, while playing Battlegrounds you are almost entirely focused on your own board and strategy and you don’t really try to counter other players directly until the very late game when you’re e.g. facing a single opponent and you’re trying to optimize your positioning based on his army composition (that you know from the last time facing the opponent).

For better or worse, all of this removes a level of depth present in most other auto battlers. Positioning in HS Battlegrounds is much more limited and simple: you can’t really counter your opponents intentionally, and the outcome of each battle is much, much more RNG-based.

This is a big con if you’re searching for competitive depth in the game, but at the same time, the vastly different battle outcomes and the occasional ridiculous RNG make for a very diverse and fun gameplay experience and could actually be a big plus for more casual players.

Battlegrounds Positioning Basics: The minions that you want to survive the longest go to the right, while minions who you want to die first go to the left. There are also specifics to consider about important minion mechanics. E.g. you usually want Deathrattle minions with summons to go in the middle so that you have enough board space for their summons. Another example: in the late game you want to play around Cleave. Put your own cleave minions on the left, and keep non-important (or high-health) minions next to your taunts so that the enemy cleave minions don’t do too much damage at the start of the combat.

There are 24 different heroes in the game, compared to none in most other auto battlers and two in Dota Underlords.

Moreover, your hero choice is partially random (you need to choose one out of two or three at the beginning of the game), which adds to the variety.

At the same time, the only difference between the heroes is their hero power that you can (typically) use at a gold cost during the recruiting phase.

In comparison, the heroes (Underlords) in Dota Underlords fight with the army, have three unique skills, a different way they generate their own resource, and 20(!) talents that you can choose from as the game progresses to make them or your army stronger.

Yet again, it’s an example of depth versus variety.

There are only four Tribes in Hearthstone Battlegrounds (Beast, Mech, Demon, Murloc), however, it’s worth noting that the tribes play a lesser role than in other auto-battlers.

In the games similar to Auto Chess getting more units of a single tribe in your army gives passive bonuses. In Battlegrounds, however, this isn’t the case.

Often minions within the same tribe interact with each other (e.g. one Murloc might gain additional damage based on the number of Murlocs on your board). This incentivizes you to run more minions of the same tribe despite the lack of a global bonus.

Often, however, your strategy will be focused more on specific minions first and tribes second, which means your Demon strat in one game might be a bit different than your Demons strat in the next. Moreover, there are quite a few minions who could be useful in different strats.

All of this lessens the problem of having too few tribes to a degree, and it’s worth mentioning that the game mode is in beta and that the devs are likely to introduce at least a few more tribes in the near future. 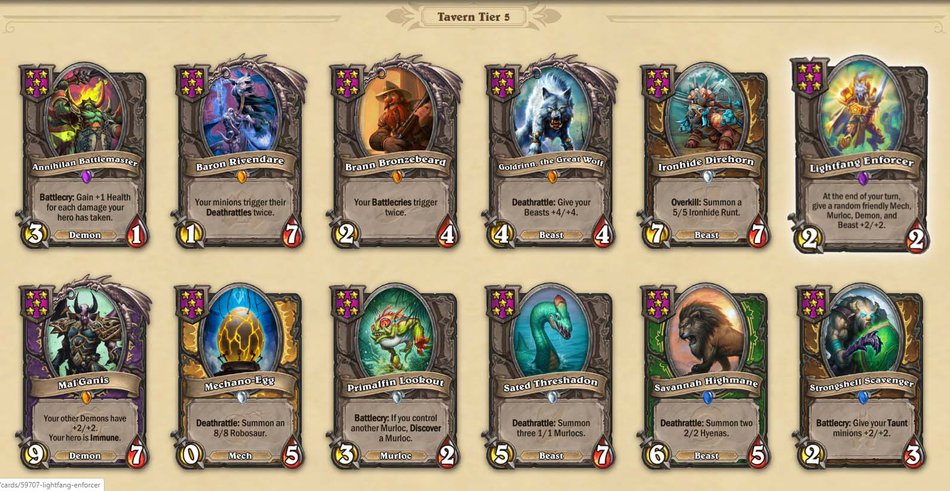 Upgrades: Like in other auto battlers, three of the same minions get fused into an upgraded version of the minion, which allows you to squeeze more value into the limited board space. In Battlegrounds, however, you also get an additional benefit for finding the upgrade – you discover a free random minion one star-level higher than your shop level.

This is yet another incentive to upgrade your shop (tavern). The game needs a lot of those because:

Hearthstone Battlegrounds is all about the buffs.

Ultimately, what determines the strongest board in Hearthstone Battlegrounds aren’t just the upgrades and the exact army composition. Buffs are arguably the most important thing.

Every buff you give your minions during the planning phase is permanent. This means that it’s entirely possible that the strongest minions on your board aren’t the highest-tier minions you have or the minions that you managed to upgrade. It’s quite likely that your strongest minions would be early-game minions that you ended up buffing multiple times from different card effects.

Using the same example from above, the 20/23 Imp starts the game as a three-star minion with 2/4 stats. Everything up to 20/23 comes from additional permanent buffs from other minions. 20/23 isn’t even an impressive number – minions that have an in-built scaling mechanic can go quite a lot higher. A lot of two-star minions are minions you can build up a lot during the duration of the game and often some of the strongest minions in the late game are massively-upgraded and buffed two-stars.

Hearthstone Battlegrounds does to the auto battler genre something similar to what Hearthstone did to CCGs. Hearthstone is (arguably) not as deep as Magic the Gathering, but quite a lot more accessible. Similarly, Battlegrounds isn’t as deep as e.g. Dota Underlords, but it’s definitely easier to hop into for a new player.

The strongest side of the game is how well it uses RNG mechanics to create variety in the gameplay experience. Those mechanics mean the game loses a bit of depth and is hard to take seriously competitively, but at the same time they give it a lot of variability and flavor each individual time you play it, which might help its longevity.

Thanks for reading! If you enjoyed the content make sure to check out the rest of the website - we cover auto battlers heavily, especially Dota Underlords!