Tencent (technically the largest gaming company in the world) just went live with their own Auto Battler mobile game (i.e. Auto Chess clone). The Tencent Auto Chess is called Chess Rush, and in this article, we’ll give you a comparison with the other big Auto Battler titles on the market – the mobile Auto Chess and Dota Underlords. The article can also serve as a beginner Chess Rush guide to get you off to a good start if you want to give the game a try.

The reason we’re not talking about Teamfights Tactics is that Chess Rush is focusing entirely on mobile and competing directly with AC and DU, while TFT is currently only playable on PC through the LoL client.

First of all, it’s quite obvious that most big companies making an Auto Chess game of their own are certainly not trying to reinvent the wheel. “If it ain’t broke don’t fix it” is the current moto for everyone.

On launch, Dota Underlords copied the original Dota Auto Chess mod in its entirety and changed fundamentally only what they thought is broken – the items system. Chess Rush is essentially doing the same thing.

The biggest innovations are the co-op (play with a friend together) and turbo (faster games) game modes, but these features are rumored to be coming to the other Auto Battler games as well in the near future.

The basics are essentially the same as in every other Auto Battler. You buy heroes from a shop, upgrade them and combine them gaining bonuses for your army, and your army fights automatically the armies of other players in rounds. The last man standing wins. The shop, economy and the board work the same as in the other Auto Chess games.

Above you can see the Chess Rush board and in-game UI. Top left you can find your active and inactive synergies. Above is the round, timer, hero limit, mana crystals, and income. On the right are all other players (expandable with details). On the bottom left are your level, XP, hero limit, and health left.

The actual board is extremely familiar – an 8x8 chessboard with an additional inactive row – your bench.

There are some minor differences (e.g. you spend Mana Crystals, not gold), but the fundamentals are mostly the same to the exact numbers.

The biggest fundamental difference is in the items system. If you get more of the same item, you can put it on the same hero to upgrade it multiple times.

There are some unique heroes, for example a Goblin (Troll/Glacier) Hunter who suicide-bombs on an enemy unit just before he dies, who replaces Batrider. If you’ve played the original Dota Auto Chess or Drodo’s mobile Auto Chess, however, you’ll find most of them very familiar.

Above you can see the four most expensive Warriors in Chess Rush. Do they seem familiar? Let’s see:

To continue the example from above, even though the four high-tier Warriors are the same as in the other Auto Chess games, two of them work a bit differently.

In Chess Rush, Humans don’t give a chance for silence on hit, but rather work with spells and mana:

Essentially, two Humans give you the mana aura of Crystal Maiden (The Source in AC). Four and six – a chance for a free Refresher orb. This sounds very powerful combined with Mages (aka Sorcerers in Chess Rush), especially bearing in mind there is no hero in Chess Rush that gives a mana aura. For the same reason, two Humans sound great for every draft.

Synergies are where Chess Rush, unlike Dota Underlords, adds a bit of originality.

Beast: the same 10% bonus damage for (2), but (4) and (6) give a chance to summon Pets at the beginning of combat – Beasts are essentially a summoning build here.

Cyborg: the same as Goblins (Scrappy) in other Auto Battlers – armor and regen on a random ally.

Furry: the same as Brawny/Cave Clan (HP shield instead of HP, but essentially the same)

Oceanborn: aka Naga in the other games, the (2) unit bonus gives the same magic resistance. The (4) unit synergy, however, gives a magic immunity shield to a random ally (essentially a BKB).

Void: a replacement of Elementals/Primordials. (2) Voids decrease a random enemy’s max health to 50%.

Jelly: a one-unit synergy, a replacement of IO.

Assassin: reworked – Assassins are invisible at the beginning of combat. They crit once they leave invisibility, and subsequent attacks have a chance to make the invisible again.

Rider: the same as Knight, a chance to get bonus armor and magic resistance.

Hunter: bonus damage for all Hunters (the old bonus from Dota Auto Chess).

Warlock: the same life steal bonus, but excess health becomes a shield, which means it’s useful even when hitting on max HP, which is a buff.

Engineer: the same as Mech in Auto Chess and Inventor in Underlords - bonus regen.

Druid: the same as Auto Chess Druids, but on death Druids in Chess Rush restore some mana to surrounding allies.

Punisher: the same as Demon Hunter, but you can reach the (4) Punisher bonus even though there are only 2 in the game because with (2) Punishers all ally Demons count for Punishers. The 4-hero bonus is 35% splash damage. The strategic implications, however, are the same: you build Punishers with Demons.

All Auto Battler games are still in development and are changing rapidly. This means they are diverging and even though most games start from the same place (even copying most individual units and just giving them different names), the strategies and meta in each game are taking a life of their own. For example, Dota Underlords recently reworked Warlocks.

In terms of fundamental strategy, it feels that Chess Rush is the fastest paced game (even on the Classic game mode), while Dota Underlords – the slowest. Pushing for upgrades and maintaining a winning streak is more viable, while in Dota Underlords the standard is to play a greedy, slower paced economy game. The main reasons:

In terms of army strategies, at the time of writing this, the original Auto Chess mobile game is being plagued by Divine (God) lineups, especially combined with Mages and Warlocks.

It’s way too early to really to judge the army meta of Chess Rush, but greedier strategies seem to be at a disadvantage because the game is fast-paced. I.e. going for (6) Mages right away would be difficult while stacking Riders (Knights) and/or Warriors with a damage backline like e.g. Goblins (Trolls) or Hunters seems to be a great idea right now.

Above you can see the end-screen of a game won with a Riders (Knights) into Hunters strategy.

How good a game looks is subjective, especially when we’re talking about art styles.

Chess Rush seems to have polished looks and good production quality overall, which is not surprising considering the resources of Tencent. It is invested heavily into the anime/manga-inspired cartoony visual style typical of Asian titles. 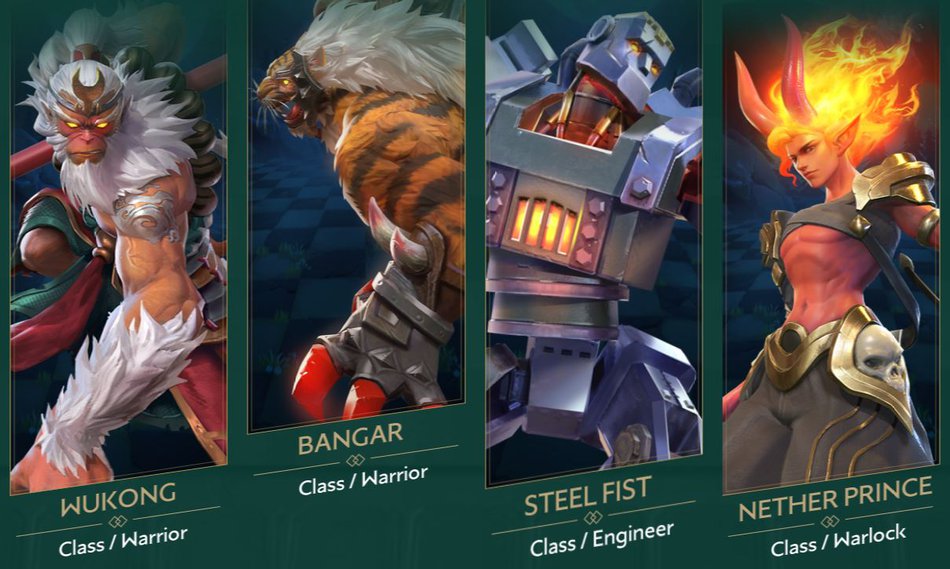 Above: Chess Rush art taken from the official website.

The main drawback is that some unit designs start to blend together especially on high star levels. Essentially all three-star units have colorful glowing particle effects. Combined with flashy spells, this makes the battlefield a bit cluttered and hard to make sense of:

Above you can see the visual clutter – spells, glowing units, and stars. This isn’t even an end-game fight.

The original Auto Chess also has a cartoony art style, but it’s a bit more Pixar-inspired rather than anime-inspired. Auto Chess battles feel a bit less cluttered and powerful spells are easier to distinguish. The biggest drawback is that Auto Chess has the least visual polish out of the three games we’re comparing.

Dota Underlords preserves Dota 2’s original art style to a large degree and looks the most “grown-up” out of the three, which is good in our books (yet some people don’t like it). In terms of polish, Underlords is up there with Chess Rush.

All in all, we’d subjectively rank the games in terms of visual appeal as:

Surprisingly, there is currently no pay to win in any of the titles and it doesn’t seel like there will be in the near future. This isn’t a surprise for Valve, but the Chinese developers live in a market where pay to win is tolerated and brings in a lot of profit. The fact that even Tencent is advertising the lack of pay to win in Chess Rush probably shows that they have ambitions to make it the global mobile leader in the auto-battler genre and don’t just aim to cash-grab in China, which is good for everyone.

Obviously, there is no winner here because all titles are not offenders and will eventually rely on a similar business model.

The key here is that Chess Rush is specifically designed for mobile. The turbo mode is a big plus in terms of convenience for mobile gamers, as it cuts the game length on average in half (10 to 25 minutes, depending on how well you’re doing).

That said, however, Auto Chess and Dota Underlords are also said to be working on a Turbo and a Co-op mode.

In terms of UI, Chess Rush is entirely adequate, but so are its competitors.

The drawback is that Chess Rush doesn’t support cross-platform play. The best game in this regard is Dota Underlords, which allows you to start a game on your computer and finish it on your phone if you need to. Auto Chess will soon also release its standalone PC version on the Epic store allowing cross-play. Chess Rush, however, seems to be focused entirely on mobile, and cross-play is unlikely to come in the near future.

Chess Rush seems to be the best Auto Battler game for mobile-only gamers who want faster games thanks to Turbo mode. The problem is that its unique selling point (faster games) will soon not be unique once the other titles implement their own versions of Turbo. If this happens soon, there is no real reason to switch from Auto Chess or Underlords to Chess Rush because the other games have advantages in other areas.

That said, it seems that Chess Rush isn’t aiming to take away the current Auto Chess player base, but rather to attract casual mobile gamers. If Tencent invests in heavy advertising and this happens, this could grow the overall Auto Battler market, which is a good thing for everyone involved!

Personally, I think Dota Underlords is currently the best Auto Battler, but in reality, all three titles have their pros and cons and different people will like a different game the most, which is perfectly fine. I hope this article helped you make up your mind about Chess Rush and to get you off to a good start when you give ita try.

If you want to stick to Dota Underlords or Auto Chess, you can check out the rest of our Auto-Battler articles and guides in our blog or library.