What we can learn: Summit 11 Grand Finals

The game that we will evaluate was played in the DotA Summit 11 Grand Finals between IG and Chaos EC for the MDL Chengdu Major invite.

What's impressive about IG is that they only dropped one game in the entire main stage and they haven’t lost any game in the finals, which are supposed to be the hardest games. This means there must be valuable lessons we can take from the Chinese squad.

What we have to keep in mind though, is that the roster on Chaos EC is a relatively new one and that they were trying out a new player for the offlane role.

In this particular case, IG had TA mid against an OD from the Chaos side. This match-up is a really interesting one but usually, TA has the upper hand. OD’s Astral is a really interesting spell since it has a few unusual mechanics in the game. For example, you could press Magic Stick/Magic Wand before getting damaged from the spell. This is also the case with some other spells such as TA’s Refraction and Nyx’s Carapace. Because of this, TA should be able to mitigate most Astral damage. Refraction also provides her with higher attack damage, which is extremely valuable for the last-hit-war.

However, the same as OD’s Astral, TA’s Refraction has a mechanic that can be exploited by OD. OD’s Arcane Orb destroys an additional charge of Refraction because the spell damage comes as a separate instance.

Despite having two kills to his name, the OD was falling behind the TA in terms of farm mainly thanks to her ability to farm the jungle faster.

In the top lane, IG had a dual-lane initially, formed of Gyro and Lich against an LC. Because of this, they were able to secure the carry’s farm quite easily.

In the bot lane, IG had a solo Lesh against a Lina and LS. There is no way for Lesh to win this lane alone, so the enemy carry also had a pretty easy lane, which resulted in a relatively even trade in the side lanes.

Mid-Game: No play-maker > no map control

In my opinion, IG out-drafted Chaos and were able to control the pace of the game throughout its entire duration. This is shown quite obviously by the graphs: 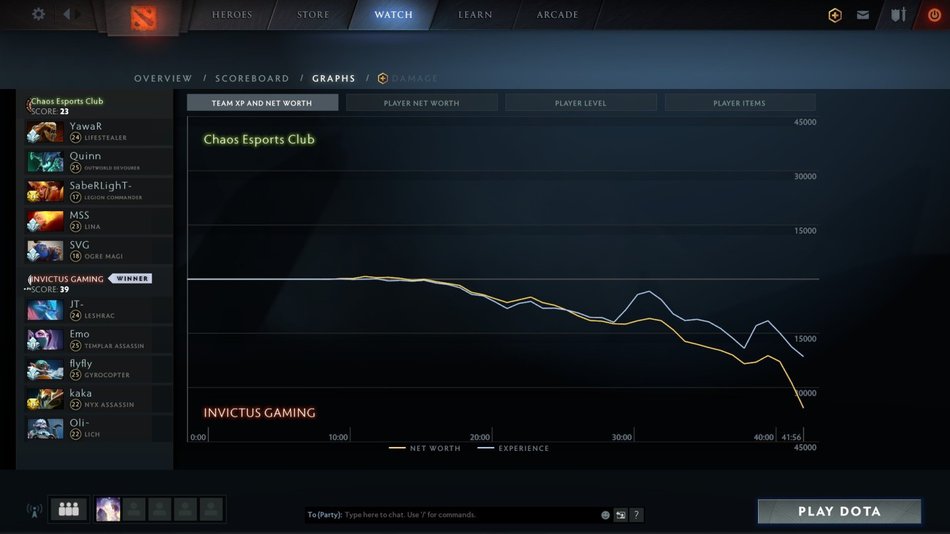 Despite not having a significant lead after the laning stage, IG was up by 8k gold by the 20th minute mark. For a certain period of time, they earned 1k gold per minute more than the enemy team. 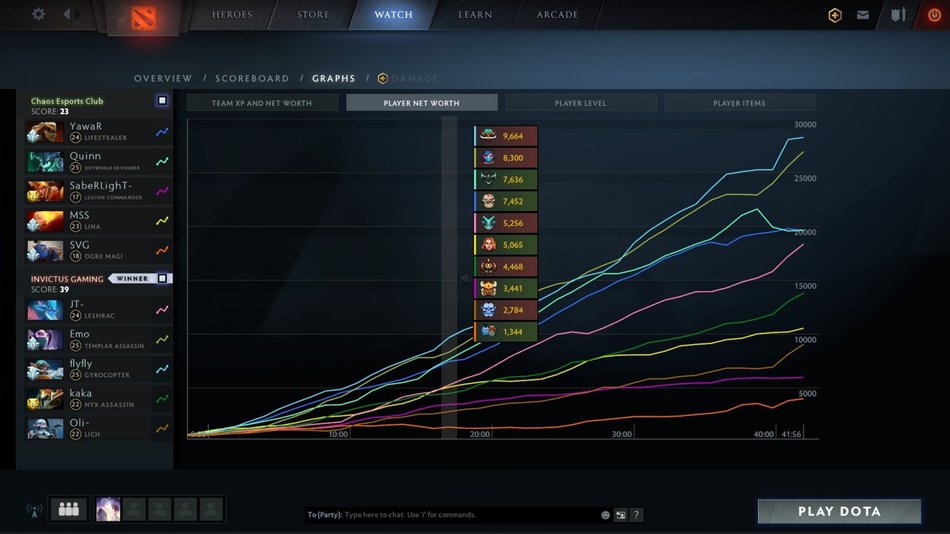 Despite not having a significant lead after the laning stage, IG was up by 8k gold by the 20th minute mark. For a certain period of time, they earned 1k gold per minute more than the enemy team.

This happened mostly because of their playmaking heroes:

The hero that was supposed to force plays for Chaos was LC, but unfortunately, she had a really hard lane since she needed played 1v2. They were supposed to initiate with LC blink while LS was infested in her to get a quick pick-off. However, LC wasn’t even able to get a blink in the whole 35+ minute game. Even if she would have gotten it earlier, kills wouldn’t come easy because IG had a counter: Lich with Frost Shield.

On the other side, IG had a more reliable/less greedy hero to force plays. Their Nyx was able to constantly make moves having a total of 5 kills and 23 assists.

In summary, Chaos wasn’t able to be proactive and were forced to react to the enemy’s moves. This meant that IG were slowly and steadily claiming a lot of map control and as a result – our-farming Chaos significantly.

The easy of taking objectives for both lineups also played a big role:

IG had a TA, which is one of the strongest heroes for taking Roshan in the entire game. Also, the push heroes were great on IG’s side in the form of TA and Lesh while also countering any form of push from the enemy team with Lich’s Frost Shield.

The farm dependence of the offlaners was also crucial:

Even though both LC and Lesh had a hard laning stage, LC felt useless most of this game while Lesh was able to contribute to his team’s victory even without a lot of items. LC needed to be farmed to have an impact – she was the only real playmaker on her team. Lesh’s job was much easier – he could just push-out waves (to catch-up in farm) and contribute AoE damage to fights as well as building damage to pushes.

Dota is a game of resources – whoever has more farm usually wins. To get farm, you need access to said resources – access to the lanes, jungles, etc.

So, whoever controls the map, controls the resources. In that sense, what defines who has a gold lead isn’t who farms the fastest, but rather who controls the map better. And if your active playmaker heroes are having a bad game, your team will have a huge difficulty controlling the map.

IG had a great showing in the minor, which makes us hopeful for them in the major. Actually playing in this tournament could be valuable experience for them and could give them momentum going forward.

It’s important to remember that in this major the T1 European teams aren’t participating, so it’s quite likely that China will have a strong showing despite of the old Chinese tradition of bad form for the first half of the year after TI.

Thanks for reading! We hope you enjoyed the analysis and found it useful. If you did, make sure to check out IDQ's other analytical pieces in our Dota 2 and Dota Underlords blog!

IDQ (standing for I Don't Quit) is a 19-year-old 7k MMR pub tryhard residing in Romania. He mostly plays pos. 1 and 2 and his most played hero is Invoker. He is an aspiring professional Dota player.

Founder of Dotahaven and esports and Dota enthusiast since forever.