The last day of TI9 will come soon and only three teams. Which one will come on top depends to a degree on how each team manages to solve the metagame puzzle they are in right now.

In the history of TI, it was often the case that the very best teams had a couple of picks that were, seemingly, impossible to deal with, which gave them a huge draft advantage.

This TI, OG introduced carry Io, which broke the meta. Now, you have to ban their Io, Enchantress, and Magnus, which leaves other top picks like Alchemist in the pool. Figuring out this puzzle might be the $15 million dollar question.

Because of this, bellow we’ll give you a short overview of the 5 heroes that we believe will define TI9 finals day.

The checkmate picks. The heroes who will win you the game if the enemy team doesn’t counter them, and in some of these cases it seems like those heroes don’t have an obvious counter: 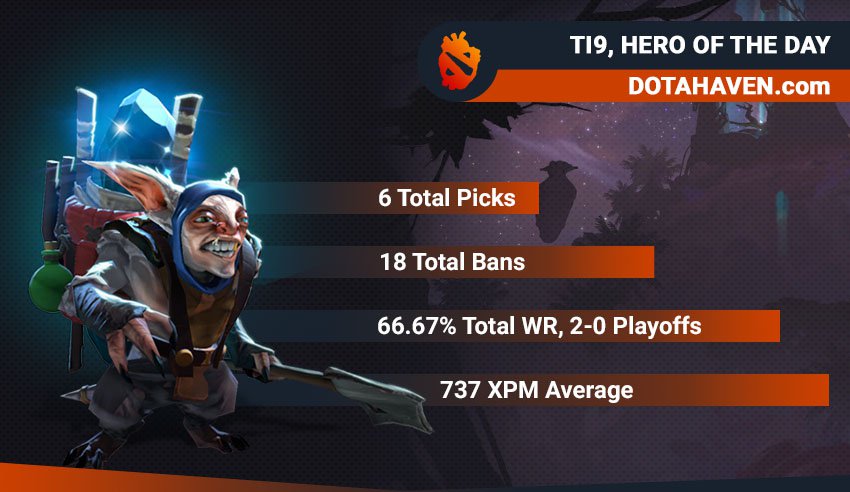 Meepo is in a way Liquid’s cheese pick in this TI (similar to Matu’s Broodmother in the past). This means that if you’re running a team vulnerable to Meepo, you better ban him – a last pick Meepo could give Liquid a guaranteed win, which is very demoralizing when the stakes are so high.

To make things even more interesting, Liquid gave carry Io his first loss in this tournament by playing W33’s signature hero. In a way, it makes sense – Io lacks the damage to threaten Meepo early-on and Meepo has a much faster timing than Io, allowing him to take over the map and finish the game before Io is ready. Liquid showed this trump card versus Secret, so this presents an interesting draft dynamic.

If Liquid’s opponent decides to pick carry Io, is it worth it to waste a first-phase ban on Meepo? Would Liquid draft Meepo right away, or would they be afraid of other counters? Liquid has one loss on Meepo versus MidOne’s core Earthshaker, so if the team is confident in their Meepo counters, they might decide to leave it in. 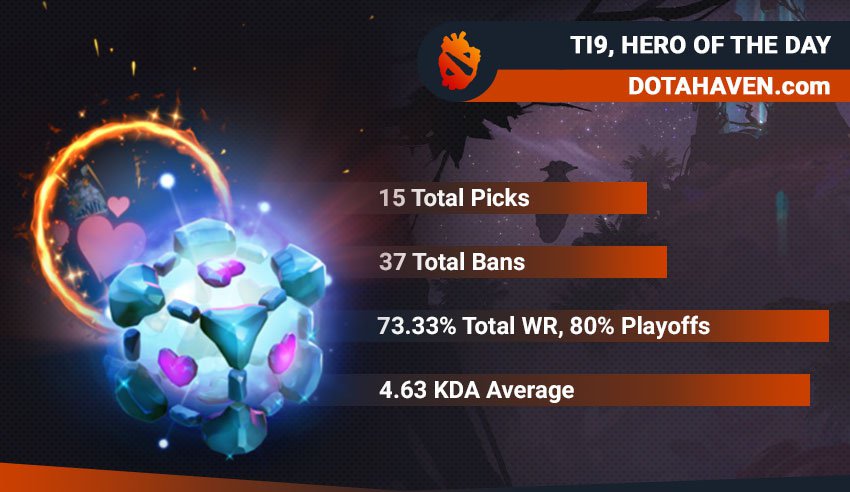 OG’s biggest innovation this TI is without a doubt carry Io. They have no losses on the hero- the strat has a few extremely strong timings that make it (almost) impossible to deal with.

OG were the only ones playing it, but recently Secret showcased that other teams can copy it successfully as well, which means that on finals day the other two teams might also use it as a surprise element in their draft.

The strat, however, is not impossible to beat. As we mentioned above, carry Io was recently defeated by W33’s Meepo. Another interesting fact is that OG has never played carry Io against Alch. It’s quite possible that Alch is also a strong counter to a carry Io strat, because he also has a much faster timing than Io and when he is pushing the base on minute 20-30, Io might not have what it takes to challenge him yet.

This means that if OG has a more than one hero to think about if they want to grab a first-pick Io. 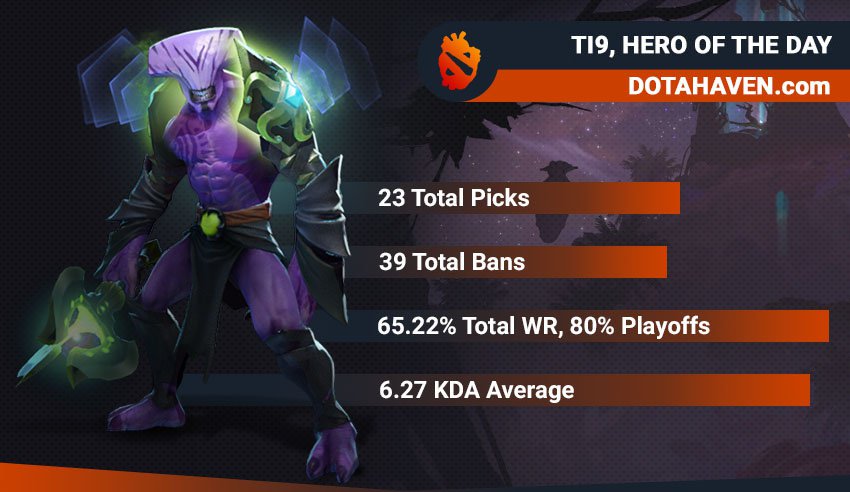 If you can simplify drafting in Dota as much as possible, you can say that there are two most important qualities each lineup should have:

Void pretty much takes care of (2) on his own, which makes it easy to build a strategy around Void – you have initiation taken care of, so your pos. 3 and 4 (who are usually the team-fight control heroes) are freed up for more unconventional picks.

Equally importantly, Void’s Chrono is so strong that if you have it on your side, your opponents have to draft direct counters. If you manage to take the strongest ones out of the game (Shadow Demon, etc.) by picking and banning them, you could leave your opponent without an answer for your strat.

Void is by far the most successful pos. 1 hero on the main stage. He’s been played in 10 games and has an 80% win rate and all three finalist teams have used him in the main event. This makes it very likely that he will decide the outcome of some games tomorrow.

One of his two losses came from Alliance, who were forced to use him in the offlane, so carry Void has won 8 out of 9 games on the main stage. Voids other loss, interestingly, came when OG was playing him. 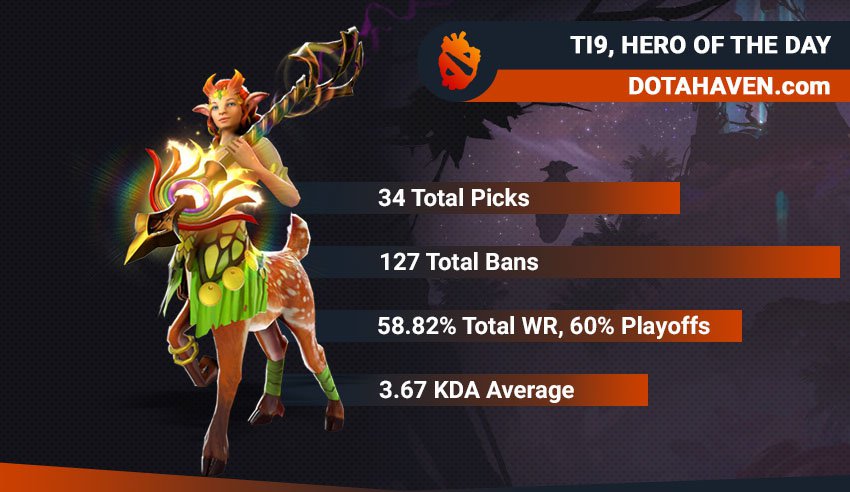 Ench is a strange hero in the sense that she doesn’t really fit the offlane meta right now. The most successful offlaners are heroes who can build the team utility items and who can control and initiate team-fights. Ench doesn’t like doing either – she plays much more like an active semi-carry. She’s so strong at what she does, however, that she is the third most contested hero on the main stage (2nd in the whole tournament) and has a very high win rate. More importantly, OG has 6 wins out of 6 games with her, and uniquely they can play her both as an offlaner or as a support.

Liquid and LGD don’t pick Enchantress as often, so she is very likely to be permanently banned versus OG in the grand finals. 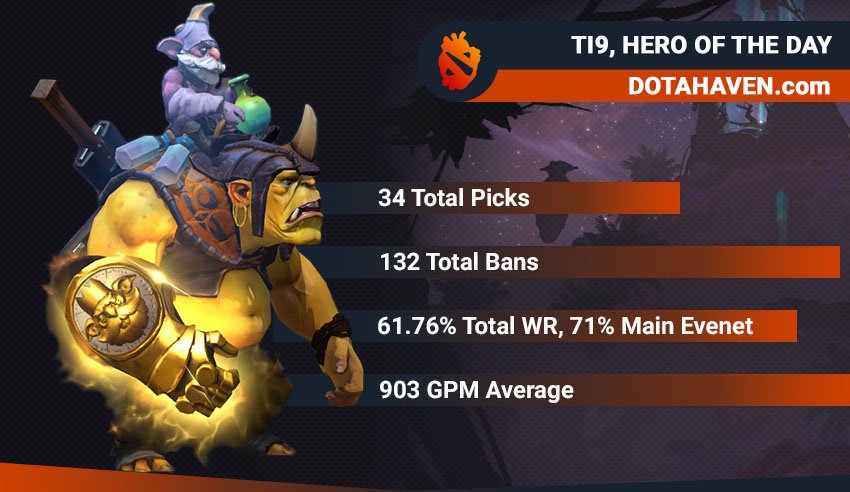 Alchemist has been the meta-defining hero this TI. He is the most-contested hero, and in the games he gets picked he maintains a very high win rate.

Recently, he gave OG two wins in a row versus LGD, and Secret lost their tournament lives to an Alchemist played by Liquid’s W33.

In a way, he has been the pick that some teams have been experimenting to let through and counter, but the recent attempts have been unsuccessful.

Dota is a game of resources. When you are playing against the fastest-farming hero in the game, you are by definition playing at a disadvantage and it’s up to you to take the initiative and try to stop him, which is much easier said than done versus some of the best teams and players in the world.

The counter to Alch hasn’t been obvious (there are different ideas, but none have been successful consistently), so if any of the three teams try to counter him, they better do it in the start of the series when their tournament lives aren’t on the line.

These are some of the very best heroes in this tournament for these three teams and they will most likely be highly contested and highly impactful on finals day. Nonetheless, they don’t seem to be “check-mate” heroes, so they didn’t manage to squeeze their way on the list above.

Chen: Has won 4 out of 5 games on the main stage because of his amazing early-mid game presence. Both OG and Liquid are comfortable playing him, but LGD hasn’t played him yet, which might give the western teams an advantage in the draft.

Rubick: When huge team-fight abilities are in the meta, Rubick will always also have a presence. On the main stage, he has 75% win rate out of 16 games. He simply allows you to make use of your opponents’ most-impactful spells, which gives you a big advantage in team fights and could win you games without a significant resource investment.

Magnus: Mag is another offlaner who can bring a lot of team-fight control to the table with RP. Empower, however, is his most strategically impactful spell and boosts the farming speed of any pos. 1 hero a great deal. That said, he has below 50% win rate on the main stage, so it could be argued that he is the best top-pick to risk leaving for your opponents.

Earth Shaker: ES has a very bad win rate on the main stage (30%), but he is still one of OG’s most picked heroes this TI and they are doing fine with him with 6 wins out of 7 games.

Dark Seer: Dark Seer was ignored during most of this TI (after many, many nerfs over the patches). Nonetheless, OG and Liquid used him successfully in combination with Alchemist. Mind Control is considered by many to be the best Dark Seer in the world, so DS might actually make a comeback on the last day of TI.

Ember: The second active mid-laner (the first one being Tiny) who has been very successful in this tournament. He has been a bit less contested than Kunkka, but he has a much better win rate than him on the main stage so far. Needless to say, all three teams can play him (Ana won TI8 with him), so he will most likely be highly contested.

Invoker: Pos. 4 Invoker gained and lost steam during the groups, and pos. 2 Invoker is still seeing play every once in a while, but he is not a highly-contested mid-laner. That said, Invoker is still one of OG’s best heroes – they can play him both on Topson or Jerax successfully, and since there is not enough space to include him in the bans, we are likely to see OG make use of him at least in some of the games. It’s worth mentioning that he is very synergistic with Void, who is one of the two top pos. 1 heroes.

It seems that the pool of game-winning pos. 1 heroes is shrinking. Gyro has an average win rate, but the other popular pos. 1 heroes (Life Stealer, Sven, Wraith King, and Slark) are all hovering around 30% win rate which is very discouraging. This will make the pos. 1 very interesting on the last day. If Void and Alch are getting first-phase banned, it is quite possible that some other pos. 1 heroes will unexpectedly become high-priority in the last two series of the tournament. In this meta, active semi-carries are popular on pos. 2, and utility heroes on pos. 3, which means the pos. 1 candidates are more likely to be true hard carries.

Naga Siren: Naga is the hero that OG bans the most out of the tournament, which clearly shows that they consider it game-breaking. Naga hasn’t made an appearance on the main stage (60% win rate in groups), which might allow her to slip through the bans and see some play. There seems to be a deficit of game-winning pos. 1 heroes right now, so she could become a pivotal pick (or at least ban) on the last day.

Anti-Mage: Another counterable, but game-winning pos. 1 hero. This makes it likely that the teams will try to use him as the last pick in a draft when the opponent doesn’t have obvious counters. Since he is one of Miracle’s signature heroes, Liquid are the ones most likely to utilize him (they have two AM games in TI9, 50% WR).

Spectre: Miracle has Anti-Mage, and Ana has Spectre. Again, a greedy pos. 1 who can win games if left unattended. Like Liquid, OG has used Spectre twice, with 50% win rate.

Carefully looking at the draft would be the key this day. Betting on the team that manages to get their hands on one of the game-breaking heroes might be a good strategy. Another one might be to bet against teams that build strategies around the under-performing but popular pos. 1 heroes (Lifestealer, Wraith King, Sven, Slark).

Use the code GOLDEN LOTUS for an up to $200 bonus!

Thanks for reading! If you are enjoying our TI9 coverage, make sure to follow us on Facebook and Twitter (below) in order to get notified when we publish new articles. Also, the likes/shares really help to spread the word!

Make sure to check the website every once in a while! We will try to publish new articles every day after the games finish.