What makes TI so great are the stories that emerge from the tournament. Stories about people filled with hopes and dreams, disappointments and triumphs. What allows these stories to emerge above all else is the environment – the game of Dota 2 and its amazing complexity.

In order to fully appreciate the stories and to glimpse at the ingenuity and creativity of the people involved, it helps to understand the environment as best as possible.

That’s why we decided to make a meta recap series that will attempt to clear-up the meta developments of the day. Without further ado, here’s our take from the TI9 meta at Day 1 of the group stage: 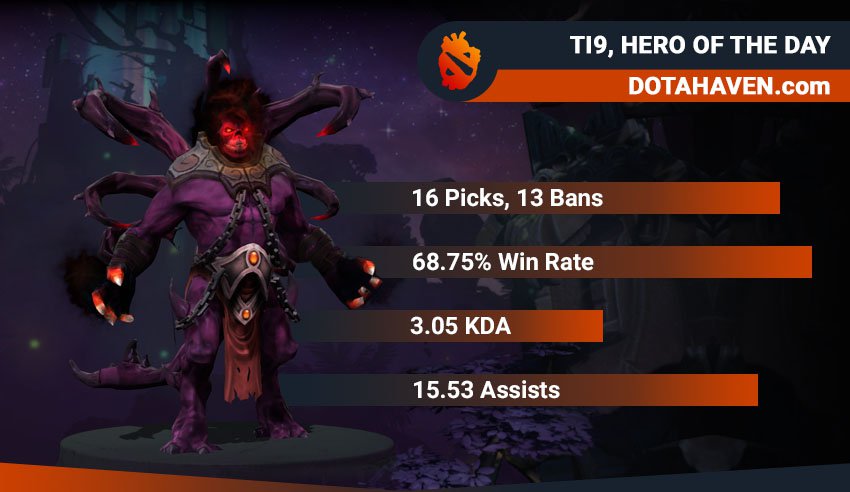 Pos. 1: The most contested hero of the day is Alchemist with 35 picks and bans. His win-rate, however, isn’t amazing at ~50%. It seems like a lot of teams have prepared good strategies to deal with an Alchemist draft (more on that below), and if they haven’t they are simply banning him. In later days of the tournament, he might fall-off in terms of popularity in favor of other better-performing pos. 1 heroes. For example, Sven plays similarly to Alch and has a bit more success than Alch with a 66.67% win rate.

Pos. 2: Ember was the most contested mid-laner on Day 1 and he has good results with 63.75% win rate. It seems like the meta is revolving around mid-laners that can play more actively and create space. This is logical when the trendy pos. 1 heroes are hard-farmers that need space like Alch, Naga, Sven, etc. Another very consistent mid hero is Kunkka with 77% win rate in 9 games. While he obviously plays differently than Ember, he has a similar role in the draft – an active semi-carry. With that said, Tiny, who is another very active midlaner, had an abysmal win rate of 18% in 11 games.

Pos. 3: Ogre is another hero that is seeing a lot of attention. With slight buffs to the hero and very strong talents, he is seeing play even as a pos. 3 core. He is a strong laner and a tanky utility hero with a lot of nuke damage potential and he also provides flexibility as you can always run him as a support. His win rate is not bad (58%), but it seems he is not game-breaking either and might lack some tools that other offlaners have. In comparison, Centaur who is also a strong laner but has better team-fight initiation tools has 83% win rate out of 6 games. Tide has 87% out of 8 games, and Magnus was banned often and played only two games, but won both. Such traditional offlaners might push more gimmicky pos. 3 heroes like Ogre and Ench (who had an abysmal 28.5% win rate) down from the top of the pile in the coming days.

Pos. 4: Mirana is the interesting pos. 4 hero – she was contested, saw play in 10 games and managed to win 7 of them. Her unreliable stun seems not to be a problem because teams are drafting plenty of disables to set up for the arrow (Sven, Shadow Demon, Elder Titan, Enigma/Naga/Tide, etc.), and she has a big map-control impact in the mid-late game with her ult and ability to scout with the Arrow. The fact that she can scale well is also a big bonus in a meta of relatively greedy pos. 4 players/heroes.

Pos. 5: Shadow Demon is by far the most impressive hero of day one – he is the third most contested and was played in 16 games with a win rate of 68.75%. He is a very impactful sacrificial support (has a defensive mechanism, disables/dispels, and good damage potential in the early game) and it seems his recurring dispel works very well in modern Dota which is filled with buffs and debuffs (defensive items). It feels bad to ban a pos. 5 hero from the start of the draft, so it is a safe bet that he will see more play in the coming days. 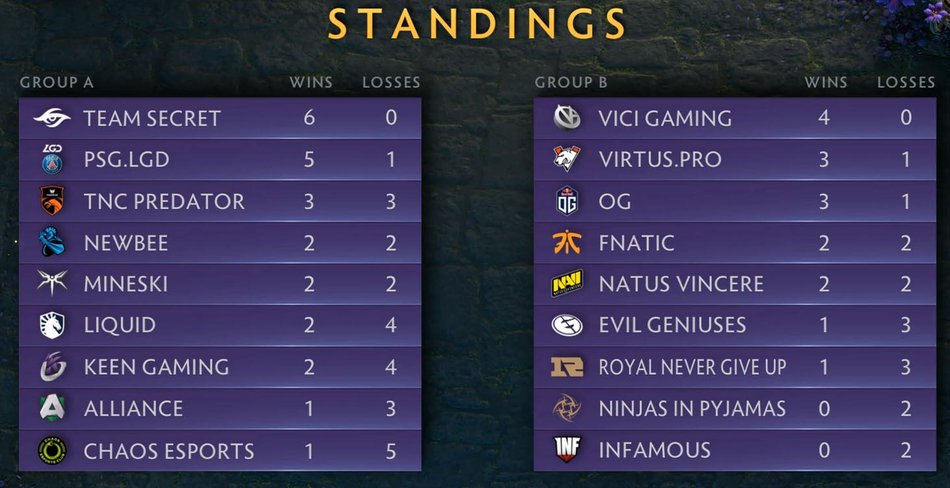 Above: the standings after TI9 Group Stage: Day 1

The meta trendsetters are without a doubt the top teams in the world. Often, however, they get their wins from superior mechanical skill and team play, which means that often they are not a good indicator of which strategies are the best ones at the tournament (sometimes they get wins even with bad strats).

In my opinion, the real first indicators of shifts in the meta are the over-performers. Teams that are winning games they have no business winning usually, deserve a closer look at what they are playing and why they are succeeding.

A good example would be TI4 because of the heavy meta shift that happened during the tournament (super aggressive 5-man Dota). The top-teams were DK and EG. The over-performers and meta trendsetters were VG and Newbee, one of which won the tournament.

Newbee (this year’s NA lineup, ex forward) pulled off the first big upset in the tournament by beating Liquid 2-0. They proceeded to lose 0-2 to Secret, but Secret didn’t lose a single game during Day 1, so this might not be a big indicator of Newbee’s form. Moreover, the games versus Secret were extremely close (i.e. Secret had no business winning them, but were able to out-play Newbee at the end).

An interesting game to observe is the first of the two, in which Liquid one of the heroes who are currently defining the TI meta – pos.1 Alch.

Alch has a new viable core item build (Phase > 2xBracer > Radiance > AC) and is able to hit extremely strong timings in the mid game that teams use to finish games (Miracle- as well as other carries were practicing him a lot in pubs before TI).

Alch, however, has an obvious weakens – he is a bad laner. Unlike in the mid lane where he pushes out the wave with Acid Spray, in the side lane he is much more vulnerable. Newbee exploited this to the maximum with an aggressive 3-lane and made sure Miracle- had a terrible start: on the 8th minute Sven had 59 last hits and denies, while Alch had 35 with two deaths to his name.

After the laning stage they continued their pressure – they have heroes who are able to fight without a lot of items with plenty of initiation and stuns. Moreover, they have AA to directly counter Alch’s ultimate.

As a result of this game, it’s quite possible that a lot of teams will avoid running safe lane Alch if they see a threat of an offensive trilane and instead they might him in the traditional mid position where he’s a bit harder to pressure.

Another team that performed better than expected is Mineski. After barely qualifying out of the SEA regionals, many people expected them to be bottom two in the tournament.

Mineski, however, started their day by beating 2-0 TNC, which most people are hyping up to be a strong team and a top 8 contender, and they to a degree displayed their potential by taking a game out of PSG.LGD. Of course, Mineski is still far from being a real contender (they lost 0-2 to Keen), but their victories against TNC deserve a closer look.

In game 1 vs TNC, Mineski had a similar puzzle to solve – how to deal with a pos. 1 Alch. They took a different approach. Instead of focusing too much on the Alch, they decided to exploit another weakness of TNC’s draft – their lack of hard disables. Mineski drafted Ember for Moonn and Weaver for Nikobaby. Mineski played a slow and steady game and in the late game when they had their luxury items TNC simply lacked the tools to stop them.

Fnatic was the last over-performer worth looking at – they started their day by beating EG 2-0, which was a big surprise because Fnatic under-performed by the end of the season and they have a new roster for TI. (They lost their next series vs VG, but VG, like Secret, are a tournament favorite and didn’t lose a game in Day 1).

Fnatic showcased a very stable understanding of draft fundamentals in their games vs EG:

EG is running the flavor of the month pos. 3 Ogre, which definitely has its place in the meta, however, the overall draft seems a little bit gimmicky.

Fnatic, on the other hand, is running a very traditional and easy to understand draft.

Their three cores are the classic:

The draft has good initiation, damage, and fight control, which helped Fnatic win fights against EG in the mid game quite effortlessly. 5-man team fight potential wins games, and Fnatic used this old rule to their advantage.

Thanks for reading! If you are enjoying our TI9 coverage, make sure to follow us on Facebook and Twitter (below) in order to get notified when we publish new articles.

Also, make sure to check the website every once in a while! We will try to publish new articles every day after the games finish.