The Dota Underlords Open tournament has concluded and the winner from all 5 000 participant has emerged: Daminov “Snofe” Ruslanovich, who is also the first player in the world that got the Lord of the White Spire rank, takes home $8000 as well as a lot of new fans considering his amazing consistency and great creativity during the tournament. He took the 2nd place in more games than we can count, which is extremely impressive in a game where RNG plays a role.

Below I’ll overview the four builds that in my opinion shaped the meta of the tournament after the new patch came out, i.e. from day 2 onward. The competitors were without a doubt some of the best Underlords players in the world, so you are very likely to see some of these strategies imitated in your own Underlords games.

After the new patch came out, Knights become the meta-defining comp on Day 2 of the tournament. (In our Dota Underlords patch analysis article we talk about how the new patch might impact the meta and how Knights benefit from it.)

Above you can see the first game on the new patch, where three knights took the top three places and somehow managed to find three-star upgrades.

In a few words, Knights didn’t lose a powerful Alliance item, while Fall From Grace (the global item that benefits them the most) is still in the game. Moreover, they are very powerful on three stars (fit the three-star meta), and don’t need lvl10 to mature, which means you can spend the extra gold on upgrades. The core comp is the following:

The (6) Knights provide amazing durability. A three-star Abaddon with the Knights buff feels almost unkillable. At the same time, the three-star Luna and two-star DK provide great AoE damage, especially when combined with the Heartless armor reduction bonus. Fall from Grace makes a big difference because you already have (2) Humans (DK and Omni), who automatically grant you the (4) Heartless bonus and increase your DPS significantly.

Another example of a game where Fall from Grace Knights strats are holding the lead in the lobby.

Of course, sticking religiously to the core build isn’t necessary. Below you can see a (4) Troll (4) Knight (4) Heartless (2) Warlocks build by Joseph that won the game. It has the potential to reach (6) Heartless (or (2) Dragons) if it reaches lvl10. It’s more powerful in the late game than the core build, but because of the four Trolls, it’s much harder to build – i.e. it’s less reliable and probably not something you can go for in every game.

The answer to Knights came very quickly: (9) Elusive has always been a decent strategy against physical damage lineups like Knights, but what makes (9) Elusive much better than in the previous patch is the change to the (9) Elusive and (2) Demon Hunters bonus.

The core strat is (6) Elusive (2) Demon Hunters at 7 units for the mid game, into (9) Elusive and (2) Demon Hunters in the late game. What makes this strategy interesting in the current meta is that it doesn’t stay at 8 or 9 units and push for upgrades. The goal is to reach lvl10 ASAP, which doesn’t give you the economy to reach three-stars on multiple units. Ideally, you still want to get three-stars on Terrorblade first, Anti-Mage second, and one of the Druids if possible, as it makes the strat much stronger.

Theoretically, it’s possible to substitute Terrorblade for Viper (or Slark) to get the (3) Assassins and possibly (2) Dragons bonus instead of the Demon Hunters. In the current meta, however, (2) Demon Hunters are usually superior (it’s worth noting that they might get nerfed, however).

Pretty much all players utilized the strat, but Joseph played it quite often. Below you can see him going for the standard core draft. In this game, he wasn’t lucky enough to get his three-star upgrades on TB, AM, or one of the Druids. There are two noteworthy things he is doing to maximize his chances:

In the last day, Snofe came up with arguably the most-creative strategy of the tournament:

The draft matures on lvl8 and has a lot of cheap units, which makes getting multiple three-star upgrades definitely possible. It has decent survivability combined with great damage output.

It has the (3) Mage magic resistance debuff, and six out of the core heroes have a magic damage ultimate. What is most interesting is the Viper + Dragons + Mages interaction. Puck unlocks Viper’s Corrosive Skin from the (2) Dragons bonus. This means that when you frontline Viper and the whole enemy team hit him, all of them get the damage over time debuff. Moreover, Corrosive Skin deals magic damage, which means that Viper is able to effectively deal very high AoE damage while being a tank. (Getting him to three-stars is a high priority in this lineup.) 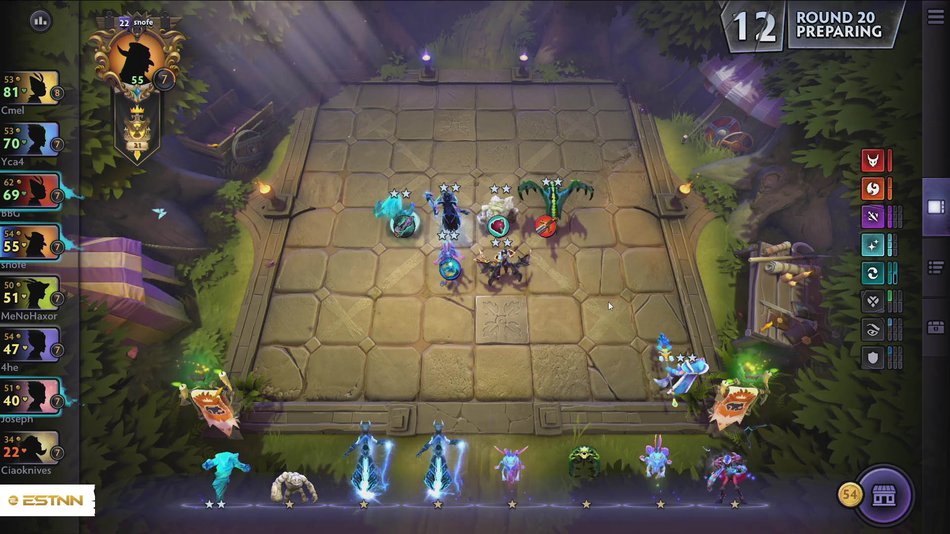 Above you can see Snofe going for the lineup in the mid game. He has Arc Warden on his bench and he only needs lvl8 to reach the core strat. From there he’ll start searching for upgrades.

This lineup is decent on paper, but was quite ingenious in the WePlay open meta at the time for two reasons:

After being the meta-defining comp, Primordials got reworked twice. In their previous iteration, they were pretty much the weakest defensive comp in the game. In the new patch, however, they present an interesting opportunity. The (4) Primordial Eidolons are quite tanky, and if you get your hands on a Summoning Stone they also start dealing decent damage. This is very valuable in the mid game – the four summons could easily secure you a win in close rounds and preserve your health. In the late game, they fall off, which makes the (4) Primordial bonus not that important. This, however, opens up the opportunity to transition into a (6) Mages build, as shown below by Snofe:

Thanks to Fall from Grace, the build has (6) Mages, (4) Heartless, (3) Assassins, (2) Primordials. It deals extremely high magic damage as any (6) Mages build, but the physical damage output of a three-star Morph with a Daedalus, the (3) Assassin, and (4) Heartless bonuses also shouldn’t be underestimated.

Below you can see (arguably) the top three builds in the last-day-meta of the Underlords tournament, each countering the one below, showcased on one of the first games of the last day:

The build standing on top is the (6) Warriors (4) Brawny build. It is the main build that allowed Cmel (the second Russian player in the tournament) to come very close to overtaking Snofe on the last day by winning him the 1st place in a few games.

It was quite obvious right when the new patch hit that Brawny had one of the strongest Alliance bonuses. Most people tried to make them work in (4) Brawny + Hunter strategies, which utilize the defensive Brawny bonus and the offensive Hunters bonus to make Beastmaster into a super-carry.

These strategies, however, had mixed success. This is mainly because they are very reliant on getting Beastmaster early on. If you do, he will get enough early-game kills, which would in term make him stronger and allow him to continue gathering kills in the mid and late game, especially when you increase his star-level. If you don’t get him early on, however, he won’t snowball and the Brawny buff would be much less useful, which would usually force you to transition into a normal Hunters draft. This is not terrible by any means, but it doesn’t automatically beat neither Knights nor Elusive, and it is vulnerable to Assassins rampaging on the backlines.

Brawny Warriors, however, have a much different philosophy. Instead of relying on Beastmaster to carry you, they make your whole lineup obscenely tanky and win fights in this way. The core strat is:

The draft is extremely tanky: bonus health from Brawny. Bonus armor from Warriors. Bonus magic resistance from Scaled (which is very easy to get because there are two Scaled Warriors). Your ninth unit is a second Warlock (usually Necro), which gives your already unkillable units great sustain. It also provides the (2) Heartless bonus to help out in DPS.

The lineup also has very good control coming from the Warriors and Disruptor. A two-star Tide isn’t much weaker than his older legendary version.

The main problem of Brawny Warriors is their DPS output, but they are tanky enough to easily outlast the enemy lineup. Getting Slardar to three-stars is usually a good idea because he actually has good DPS output. In this variation the main damage-dealer is Troll. That said, if you can’t find Troll, Doom in his place will also give you a decent damage output.

The strat fits the tournament (and Patch) meta great because the other top comps simply lack the damage to win against it. The biggest threat is a three-star Terrorblade, but this strat has a creative solution to this problem: 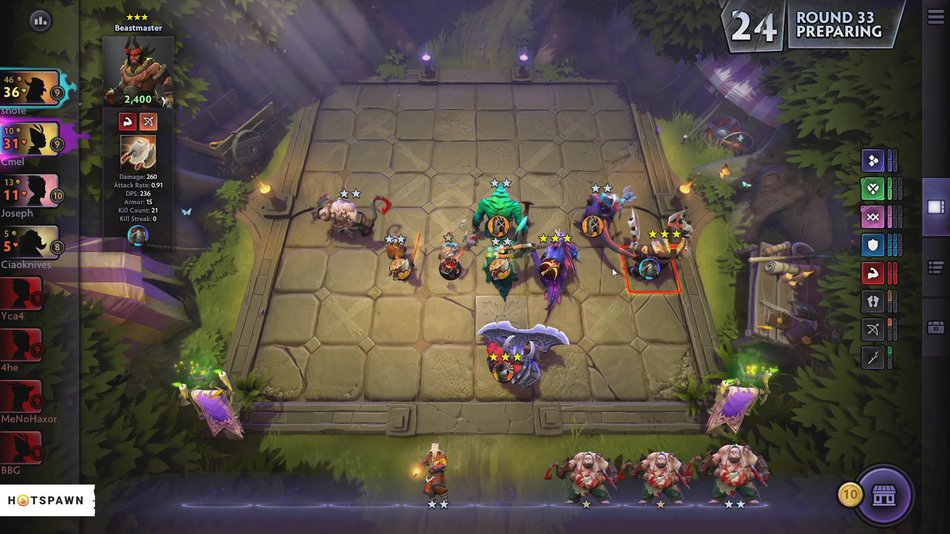 Above you can see the Brawny Warrior strat played by Cmel. One thing that might seem out of place is the three-star Axe in the back. Actually, he has a purpose there: he is protecting against Assassins and possibly other Blink Dagger damage-dealers like Terrorblade. He doesn’t simply act as a tank, however. He has a Blademail. It is usually considered one of the weakest items in the game, but in this case, Axe has a huge HP pool thanks to the Brawny buff. Assassins and Terrorblade literally kill themselves before they are able to bring down Axe.

Of course, the core build is not the only option. Thanks to Fall from Grace, you can see Cmel going for the strat with Alch instead of Necro and Kunkka instead of Troll:

Thanks for reading! I hope the article was useful and enjoyable and you’ll have fun trying out these four comps in your own games!

For more content, check out our blog and library.