MDL: Gyro, the Best Carry in the History of Dota

Gyrocopter’s success in MDL Chengdu and throughout competitive Dota history

Bellow, I’ll try to answer why Gyro has been one of the best heroes for tournaments and pubs pretty much since he appeared in competitive Dota regardless of the patch or metagame.

Gyro is the most picked hero in the MDL Chengdu qualifiers, having a pick rate of 38%, highest in the tournament, and a win rate of 55% at the moment. He has a total pick rate and ban rate of 77% which means that if he wasn’t banned, he was picked, most of the time.

55% doesn’t sound broken in itself, but in the context of almost always being picked in the first phase (i.e. never being a surprise pick), this is quite significant. People are aware he’s coming and have plenty of picks left to counter him. Yet, they fail to do so more often than not.

More importantly, this is nothing new for Gyro. He is the 2nd55 most picked carry in the history of competitive Dota (only behind Lifestealer) according to datdota.com.

So, what makes him great regardless of patch changes and metagame shifts? 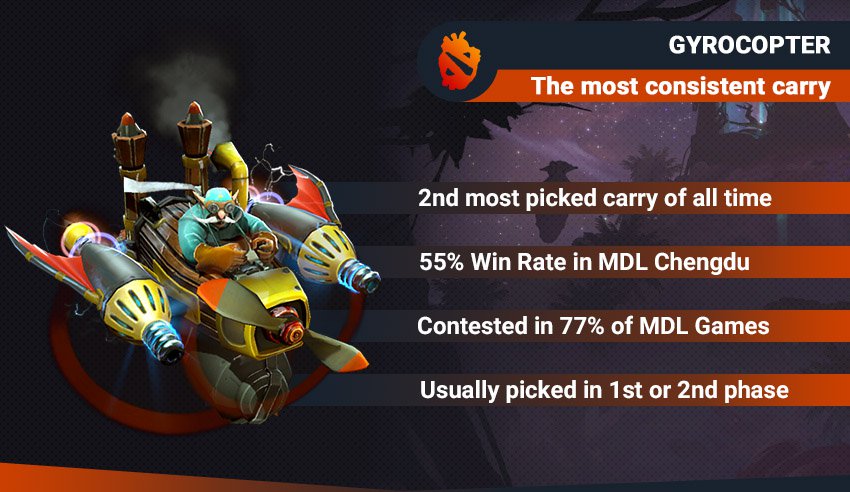 WHY IS GYRO GOOD?

Let’s go over the heroes' strengths to try to understand why the hero is so good at the moment.

1. He is extremely versatile:

This is shown by the pick order. The hero was mostly picked in the first phase of the draft for a few simple reasons: he can be played mid, as a position 2 and he can be played carry, as a position 1.The point that I am trying to emphasize is that if he is countered in the mid lane, he could play in the safe lane and thus offer a counter in the later stages of the draft for the enemy midlaner. If he is a carry, there are multiple options. He can either be played in the safe lane with a support, thus forming a dual lane, or he can go aggressive on the enemy carry in the offlane with a dual or trilane because of the hero's next strength.

2. He is really strong at every stage of the game:

Early game he has a huge amount of damage because of the rocket barrage so no hero can really man-up on him, this spell being good also later in the game because the lvl 15 talent that gives more damage to the spell. Mid game and late game his damage mostly comes with his third spell, flack cannon, this ability giving the hero a multiple target attack for 6 hits at level 4 with 100% of his damage. Because of this, he is able most of the time to hit all the enemy heroes in a team fight with devastating AoE damage.

3. He doesn’t really lose lanes and can push the pace:

He threatens kills with his huge magic damage spells, thus controlling the map and obtaining more gold than then opponent heroes. Because of this, his allied team can control some important objectives such as Rosh and bounty runes, winning the game from the resources standpoint.

4. His ability to clear stacks and push waves:

He does this fast thanks to his AoE potential. Thanks to this, combined with his map control, he obtains a huge lead and is able to group up with his team faster than the enemy carry could and is able to get early towers with ease.

E.G. one of the best heroes in the meta is Void and he is incredibly difficult to handle with a normal hero. With Gyro, even if he Chronos you, your Rocket Barrage still does damage. If you have Aghs , you still hit in Chrono, etc.

Against Naga, another hero that is really strong in this meta, you can build Aghs into Mjollnir and the illusions melt thanks to the frequent lightning procs. Also, just like with Chrono, your Rocket Barrage and Aghs attacks still do damage when you’re disabled by Song of the Siren.

The only decent counters to the hero in the current meta would be Morphling, Outworld Devourer, and Slark, but you can deal with them with the other picks or bans.

There is a common thread in all of his strengths: consistency.

Gyro is consistently good in many situations (versus different heroes, in different lanes) and in all stages of the game (early, mid, late). This means that it’s almost never a mistake to draft him even early on – he can perform in almost any match and is hard to counter.

This is also the major reason why he is so good regardless of the metagame: no matter what heroes are popular in the patch or if the meta is fast-paced or farming-oriented, he can still perform consistently.

MDL, Liquid vs Ninjas in Pyjamas:

Gyro was picked in the second phase, in favor of Ember Spirit as first pick, a hero with similar strengths. He is able to win the lane because of his strengths listed above and roam around the map with his team, getting kills right and left utilizing the very low cooldown of their whole lineup. They even picked a KotL, and his Chakra Magic reduces cooldowns on spells further along with mana sustain, making their draft able to apply relentless pressure. Gyro finished the game with a score of  13-1-17. This game was against a Slark, and as I mentioned before, he is one of the best heroes versus Gyrocopter on theory. Nonetheless, Slark isn’t particularly good against early-game pressure (needs a bit of free space before he can start participating in group engagements) and wasn’t able to reach his potential this game because of the playstyle of Alliance.

The hero was picked in the first phase and their draft was similar to the previous one discussed. They were able to win their lanes and push the advantage based on their low cooldown spells, while the enemies had no way to respond to their aggression or to kill them. A major factor was Timbersaw and Abbadon, both really durable heroes that can apply pressure together with Gyro early and secure a very fast victory.

The difference is that Liquid picked Gyro this time around. First draft pick, as usual, Gyro’s team managed to win this game as well. As in all drafts so far, they picked heroes that rely on low cooldowns such as Tiny, Timber, and Oracle. This game wasn’t so one-sided since they lost the side lanes and the middle lane matchup was kind of equal. However, they still managed to win because of the itemization: first item Black King Bar, and the map control and pressure they were able to apply together as a team. Even though the enemy team won their lanes, they were forced to play scared and little by little they lost map control – towers, and bounty runes, thus losing gold and experience until they were stuck in the base waiting get raxed, powerless against the Gyro deathball lineup.

There is once again something similar in the examples above. In this meta teams use Gyro as a high-tempo team-fighting carry. They pick strong 5-man drafts with low cooldowns (i.e. downtime) to win map control in the early-mid game.

The interesting thing is that this hasn’t always been the case. In previous slower metagames, Gyro was also picked as a passive hero who likes to farm stacks and then win 5v5 team fights in the late game once he has his luxury items.

This is a great illustration of how the hero is able to adapt and perform well in vastly different metas.

CONSISTENT vs FLAVOR OF THE MONTH

In my opinion, Gyro is one of the most important heroes to learn as a carry player.

The reason is pretty simple – no matter how the meta shifts, you will always be able to fall back on your Gyro and carry games. Even direct nerfs to him are unlikely to change that a lot – the nerfs need to be extremely severe (or the hero needs to be reworked) to make him less versatile and consistent.

Lifestealer and Jugg: the 1st and 3rd most popular carry heroes in Dota historically have something common with Gyro. They are hard to counter directly, they are tactically versatile, and they are strong in all stages of the game.

Dark Seer: an example of an evergreen utility hero who seems to be relevant even after countless consecutive nerfs. Dark Seer does two things well – he pushes out dangerous lanes (the dead lane) and finds farm even when he’s heavily pressured. Then, he uses this farm to buy utility items and win team-fights with them and with his team-fight combo: Vacuum + Wall. These strengths of his are always useful.

Rubick: the most picked hero in the history of Dota, usually as a support. The reason he’s that consistent is that he has all the usual useful tools of support heroes (ranged, has a nuke and a disable, farm-independent,) while also having the potential for great impact with his Spell Steal (and high skill ceiling). Learning to play him well is likely to be useful in every possible meta.

The other kind of heroes that people often use to climb MMR and win competitive games are the flavor of the month, game-breaking heroes.

In this patch arguably the biggest culprit is Nightstalker. While it’s certainly possible to learn to play him and win plenty of games with him, your efforts and the new skills you’ve gained might become obsolete if he gets nerfed heavily (which happens with pretty much every flavor of the month hero).

The reason he’s not as consistent as the examples above is simple: he is not as versatile. He excels in one playstyle (roaming/ganking), and when the meta shifts away from it or when he gets nerfed, his win rate will suffer significantly. While he’s one of the most popular heroes now, he was entirely ignored just a few patches ago, and it isn’t far-fetched to assume that he will fall out of favor in the future as well.

All of this doesn’t mean that it’s a bad idea to learn to play him. It simply means that it’s a short-term strategy while mastering the consistent heroes from above will likely always be useful.

Thanks for reading! If you think Gyrocopter is a hero you want to learn, you can check out the in-depth Gyrocopter Guide we made together with Liquid.Qojqva a while back, when he played for Alliance!

IDQ (standing for I Don't Quit) is a 19-year-old 7k MMR pub tryhard residing in Romania. He mostly plays pos. 1 and 2 and his most played hero is Invoker. He is an aspiring professional Dota player.

Founder of Dotahaven and esports and Dota enthusiast since forever.